I recently saw a picture in a magazine of toasted whole wheat with a slow cooked egg yolk. Something about the dark crunchiness of the wheat appealed – I could imagine it’s dense, chewy texture, subtly enhanced with the rich gooeyness of the egg yolk. It looked simple. Basic. Impossible to tell, from the picture, if it was enhanced with something extravagant like truffle oil or handpicked wild micro-herbs. No recipe, just a picture amongst many pictures.

Whole-gains seem the terrain of hippies and health nuts, the food of anaemic and fashionable vegans and ultra-fit protein obsessed gym junkies. It sounds like a diet, or an extreme life-style choice. Which immediately conjures a sense of deprivation. Dieting seems to evoke a sense of loss of more than just weight. A world without sugar and fat and carbs and sweets and treats. A world without flavour. A world of rabbit food and cardboard tasting meal-substitutes.

And in all honesty, at the end of a winter that I dealt with primarily through laziness and comfort food, a reassessment of the healthiness of what I eat is probably called for. Not ‘a diet’, not a fad or a quick fix. Just a subtle realignment, now that my hostility to the season can be set aside for another year.

But there is something about toasted unprocessed whole grains, nutty and caramel, crisp and yielding, with a taste like the smell of cooking toast, that is homey and satisfying and comforting. On close inspection, toasted grains have nothing in common with deprivation. Despite the indisputable health and environmental benefits, whole grains are an unexpected treat, and now, more than a little bit high-end. Hence their appearance in a glossy magazine devoted to the valorisation of the chef’s arts.

I could have gone out and bought some farro, the oh so cool grain of the moment, some kind of ancient and original variety of wheat. Or whole wheat kernals. Or mixed red and black quinoa with onions and garlic and spinach. But I have barley in the pantry, set aside for adding to rustic soups. And what better to match it with than mung beans, that other shared bastion of the hug-the-earth-cum-health-kick movement?

There is something so terribly retro about mung beans. Reserved for the super-health conscious and hippies, they’ve hung around in health food shops and food co-ops with an endless seventies vibe, kind of overlooked and forgotten.

With English mint and plenty of salt, this was fresh and earthy, and a little bit pretty. And ridiculously healthy. 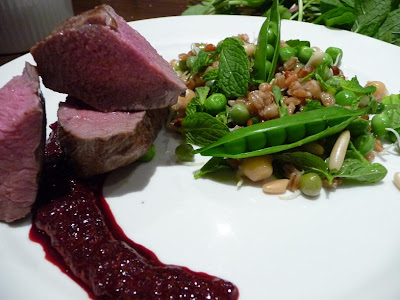 
In a large non stick fry pan heat the barley over a medium heat, shaking the pan or stirring to prevent the barley from burning. When the barely is a deep golden colour, add two cups of water or stock and lower the heat. Simmer for about half an hour, until the barley is soft and chewy (and most of the liquid is evaporated. Strain and add to a large bowl.

Bring a small saucepan of water to the boil, add peas and cook for about 5 minutes. In the last minute of cooking, add the mixed mung beans, just to soften a little. Add to the bowl with the barley and remaining ingredients and toss to combine. Season with salt and pepper. 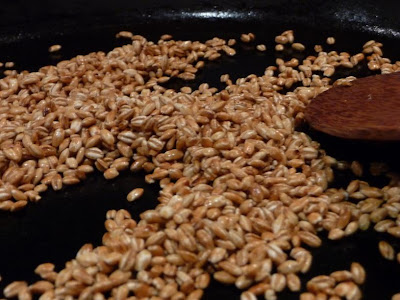