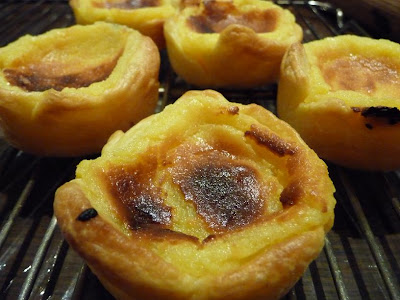 I love the hidden depths of history and mystery that lie behind even the most simple of foods.

Last Thursday I left early for work. This resulted in me running behind schedule (there is a weird logic to this) and hence foregoing coffee on the way to the office. Later that morning, when I escaped to quieten my caffeine withdrawal symptoms I had the misfortune of arriving in the cafe at the precise moment a tray of Portuguese custard tarts were removed from the oven. Bubbly and patchy with caramelisation. Puffed up and buttery. Goopy.

In my weakened state I was powerless to resist. Like the selfish caffeine addict that I am, I purchased a single tart all for myself and practically inhaled it before the coffee was half empty.

Arguably, pretty much anything straight from the oven is guaranteed to smell and taste 10% better than anything else, ever. But I have a particular soft spot for the pastel de nata.* And I’m not the only one. I remember visiting no fewer than four cafes with a colleague one afternoon to satisfy her very specific and ultimately unsatisfiable craving.

Pastry. Egg custard. Done. Nothing could be more basic. But the Portuguese custard tart is a little like the Holy Grail. “We already got one” cry the custard tart makers of England (with their short-crust pastry and nutmeg sprinkling) and the French (with their egg enhanced crème pattisierie and glazed fruits).** Not so: this custard tart is truly divine. A heavenly blending of light puff pastry that cracks as your teeth hit each layer of air pocket followed by flaky crispness; and dense and sticky custard, skin blotched and blistered, custard smooth and thick. Somehow the custard remains un-curdled and yet the pastry achieves crispness: a miracle given the tendency of custard to split at high temperatures and pastry to remain sulkily chewy in anything less than a scorching hot oven.

No wonder, then, that this tart was born in a convent, bought to life, as the story would have it, by nuns (or possibly monks) of the Mosteiro dos Jerónimos in Belém district of Lisbon. Exactly when they were first made it is not known. What is known is that the Monastery sold the tarts to the local people and travelers and developed a loyal – or possibly addicted - following. Following the 1820 revolution, like so many others, the monastery was closed (probably around 1837). The recipe, however, was a commodity: sold to the local bakery, who secretly guards the original recipe to this day.***

Fine: but what happened to the nuns? Having sold their recipe (for how much?), where did they go? Curiosity eats away at me, more maddening that chasing the caffeine dragon. Their recipe: fixed at a point in time, still sold by the same bakery, in the shadow of the Monastery. The buildings of the Mosteiro dos Jerónimos, world heritage listed. But the lives of these original bakers: puff, like the pastry they perfected.

I have never eaten Pasteis de Belém. I may constantly settle for the Portuguese custard tart of the cafe-near-work. But I will be unsettled by the idea that these black-habited pastry makers drifted out of history. Anyone who has seen Indiana Jones and the Last Crusade will know that the journey is more important than the destination: searching for the Holy Grail is about the things we find out about ourselves, not the cup itself. So it begins again: with a virgin tart maker.
* Apparently, this is the Portuguese term for the Portuguese custard tart. As such, it is possible the most important phrase I know in Portuguese. Also the only phrase.
** It is vitally important that you try to imitate the atrocious French accent affected by John Clease in Monty Python and the Holy Grail when saying “we already got one”.
*** Their tarts are known as Pasteis de Belém (ie, pastries of Belém). The rest of us survive, when we can score, on the wonderful imitation: pasteis de nata (pastries of cream).

I followed the recipe given at Not Quite Nigella (originally a Bill Granger recipe), as adapted below. Note – I thought this a little sweet, so next time I will play around with less sugar. I would also be interested to up the egg count. Note that Ms Elliott quite sensibly suggests using good quality bought puff pastry. I attempted to make my own.
Pre-heat the oven to extremely hot. I had mine on fan forced at 240ºc.
For the custard
3 egg yolks (as suggested by Ms Elliott, I used 2 yolks and 1 whole egg)
115g caster sugar
2 tbsp cornflour
230ml cream (I used cream, Ms Elliott successfully substitutes additional milk)
170ml Milk
2 tsp vanilla extract
300g rolled puff pastry (or one sheet of puff pastry)
3 strands saffron (my addition)
¼ tsp grated lemon rind (my addition)

Whisk the eggs, sugar and cornflour with beaters until smooth. Whisk in the milk and cream. Pour into a heavy based saucepan, add saffron and lemon rind. Gently heat until it starts to thicken to the consistency of thickened cream (I don’t like to boil custard, as I am terrified of splitting it, even when stabilised with cornflour).

Strain through a sieve into a heat proof bowl, then continue to heat the custard over a saucepan of simmering watering (ie, your basic “baine marie” or double boiler set up) until thick like, well, store bought custard or cake batter.

Set aside to cool (cover the surface with plastic wrap to stop a skin forming).

When cool, fill the pastry shells. 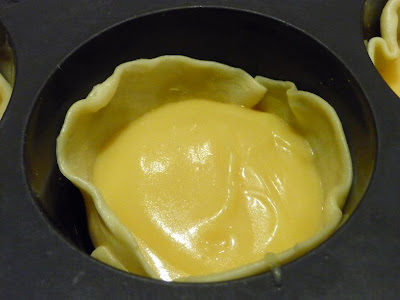 If using a block of pastry, either store bought or home made, roll out so it is longish and narrowish. If using a square pastry sheet, cut in half and place one half on top of the other.

Roll the pastry into a cylinder along the long edge. Chill. Then slice into 1.5 cm rounds, then roll each of these rounds into a very thin flat circle, about 10-12 cm diameter . This gives the signature spiral pattern on the pastry shell. Line a muffin tin. 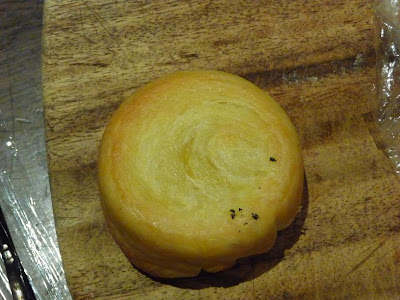 Fill the rounds to just below the rim with custard.
To cook
Place the tray in the top of the oven and cook for about 20-25 minutes. Do check – when the pastry is crispy and the tops have patches of brown they should be ready.
Important: leave to cool for a little while, so the custard can set. 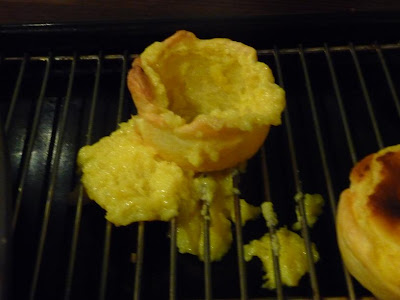 Posted by Miss Anne at 2:49 AM
Labels: baking, dessert, sweet-things