Tacos. Grown up finger painting for the mouth 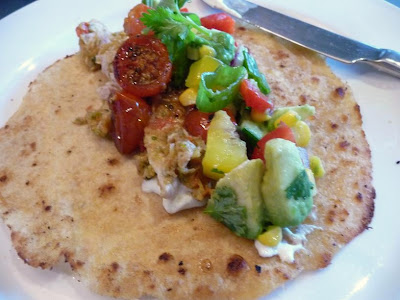 Growing up, tacos were always a big deal in our house.

My parents owned a particularly lovely carved serving platter, made, I think, from the wood of a coconut palm, in the shape of a leaf. The smooth deep bowl of it was divided in to four smaller hollows, a perfect home for keeping the various taco fillings separate and yet all together. It was used almost exclusively for taco nights.

Tacos-for-dinner was a production, a matter of great ceremony and extra fuss. Tacos were purchased as ready-made corn-chip shells in a taco-kit box, to be crisped in oven for ten minutes prior to eating. It was a great test of skill and nerve to neatly stand each shell vertical, fold-up, balanced on the curved edges like little clog-clad feet. Important not to forget to remove from the oven, lest the shells overcook (or as I remember once, start to smoke).

The boy child and I did not eat tomatoes, capsicum, avocado or coriander. What we did eat was grated Kraft cheese, grated carrot, shredded ice-berg lettuce, sour-cream, sweet (store bought!) salsa and pan fried beef mince. Taco night embodied semi-rural Australia, which is a long, long way from Mexico.

And there was an art to preparing the taco: an intricate and personalised order in which the ingredients were added. My preference: meat, salsa, cheese, carrot, lettuce, sour cream. This, for me, was the only and most logical way to construct the meal: the salsa seasoned the meat, the warm meat melted the cheese, and the carrot (a vegetable able to consumed with equal enjoyment cooked or raw) acted as a thermal buffer, protecting the lettuce from wilting. Sometimes, towards the end of a taco eating contest (a contest between my brother and I, a contest between my present and previous consumption record), the final taco was snapped in half, with the messily discarded jumble of previous taco fillings scooped up and sandwiched in between the broken shell.

Tacos were fun, gluttonous, sweet and salty and crunchy and cheesy. It was hands on, messy, full of sharing and hording. It was impossible to finish the meal with anything other than mess smeared across our faces and dripping down our elbows. Tacos always preceded rather than followed a bath.

The gap between the taco-kits of my childhood and the Mexican tacos which pre-date European arrival is immense. Perhaps the only commonality is the yellow-corn-colour of the cardboard textured hard-shells.

Real tacos, homemade soft corn or flour tortillas, salsa fresh with coriander and lime, smoky marinated chicken or fish, are a revelation. If anything, the evil glee that making a mess while eating inspired is multiplied exponentially, as is the pleasure of a riot of flavours and delight of assembling it just so. I have flour in my hair. I have somehow managed to spill the juice of half a lime directly into my right hand pocket. I have dough stuck to my knuckles and finger nails. Coriander-chilli-ginger-garlic-lime-zest paste smeared along the inside of one forearm. And that was before I even started eating. 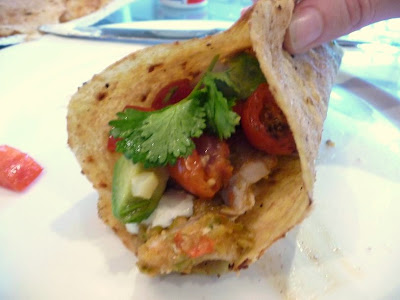 To serve: add a spoonful of each component to the warm soft taco in the order that makes the most sense to you. Fold in half and make a mess.

I realise that I am a novice when it comes to tortillas, and that usually you make either corn or flour tortillas, not a combination of both. I understand that in taco-profilic countries like America and Mexico there are things such as tortilla presses and more than one brand of maize flour. People have practice and opportunity there. Still, this beats the pants off buying taco-kits, and adding wheat flour to the maize flour helps the dough keep its elasticity.

Mix the flours and salt together. Make a well, and add 1 cup of the water and the oil. Mixed with a hand, and as the dough starts to come together, add the remaining water (as needed) – you should end up with a soft, warm slightly sticky dough. Knead lightly until just smooth (not more than 5 minutes). Break the dough into 16 ball shaped pieces (keep them covered with plastic wrap whilst working each ball).

Place a ball of dough between two sheets of baking paper and roll out with a rolling pin until about 20 cm in diameter. Peel one piece of paper away from the tortilla, leaving the other attached. Repeat for the remaining balls.

Heat a non stick frying pan to hot, brush with a little oil.

Place the tortilla paper side up in the pan – as the tortilla starts to cook, the dough will dry and the paper will peel away (this takes about 1 minute). When the paper is removed, turn the tortilla over, and cook the other side for about 30 seconds. Repeat with remaining dough. Set aside and wrap in a clean tea-towel to keep warm. 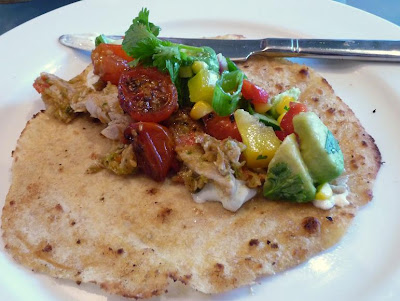 In her book Fire, Christine Mansfield gives a beautiful recipe for Mexican chicken and lime soup. This recipe draws on the ingredients that make that soup so fresh and vibrant.

Puree the garlic, ginger, chilli, coriander, tomato onions and lime zest until a thick paste forms. Heat the oil in a large fry pan, add the chicken strips and paste. Cook over a high heat until the chicken is cooked through the paste is thickened. Set aside.

Toss all ingredients together.

Cut the cherry tomatoes in half. Add all ingredient to a baking dish and toss to coat. Cook for about ½ hour or until the tomatoes are starting to caramelise but still retain their shape.
Posted by Miss Anne at 2:48 AM
Labels: chicken, dairy-free, spice, tomatoes