A tale of two meals: (over) indulgent butter sauce 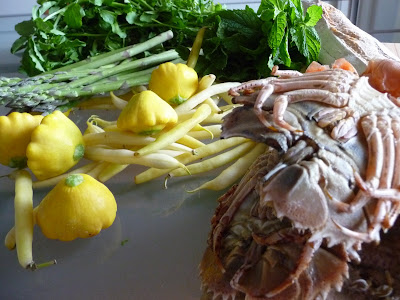 It was the best of times, it was the worst of times.
‘We should order the salad’ .
I blink, innocently. I am of course trying my hardest to imply that it’s healthy, it’s light, refreshing. I have been to this restaurant before. I know what I like. It is healthy, it is light, it is refreshing. ‘And the pork belly and the duck and lychee coconut curry, some rice. Oo – and some ho mok to start. That should be enough for the two of us’.
The salad is healthy. This is not my primary motivation. The salad is gai larb, and this restaurant does not hold back on the chilli. In fact, all four dishes are heavily laced with chilli and measure around 9 on the Richter scale.
My dining companion finished the evening with sweat pouring down his face (yes, I did in fact order all that food for two people. And we ate it).
I have a fondness for very spicy food.
Gai larb is simple, fresh and deadly. A traditional Laotian dish that has migrated to Thailand – at its most basic, ground meat, chilli, mint, chilli, vegetables and chilli, with a lime and fish sauce dressing.
Sometimes when I make it, I remember to de-seed the chillies before I mince them. Sometimes I forget.

Tonight, in an effort to atone for the eye-watering larb, I turned to the French, who have a far more peaceful culinary tradition. Blanched vegetables, boiled shellfish, beurre blanc sauce. To my peril, I made the same error as the French aristocracy, mistaking my desire for uninterrupted gentle richness for a protection against harm. Like a cross between Julia Childs and the Maquis de Sade I feel coated in butter (and not in a good way). This much butter is a long, slow walk to the guillotine. And there will be no mercy. 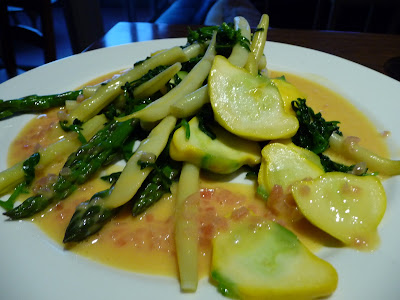 Despite my adoration of fancy food, I rarely cook or eat meals with lots of cream or butter or cheese. I just generally prefer my food light and fresh. And so I reaped the results of my decadence.** Even though I used less than half as much butter as the recipe said.

It is true that fat is a flavour carrier and a flavour enhancer. I often splash a little olive oil over steamed vegetables, or brush a little onto grilled meat after cooking. Not spoonfuls, but a tiny drop, enough that the flavour and the silkiness is present. The butter did enhance the sweetness of the Moreton Bay Bugs, the beurre blanc subtly cut through and heightened by the sourness of the wine and vinegar base. But for my palate, a single cube or two of butter, whisked into the wine and vinegar reduction, would have been just as flavour enhancing.*** And possibly more life-preserving.
It is a far, far better thing that I do, than I have ever done; it is a far, far better rest that I go to, than I have ever known.
* Sorry
** I was sopping it up with a piece of bread. After I finished eating. After I knew that I had reached the point of excess. I admit it. But it tastes so good.
*** The recipe originally called for 250 grams!! And I only used about 90 g. Recipe: Summer vegetable and Moreton Bay Bug salad
500g Balmain or Moreton Bay Bugs (renders about 200-250 g meat – you could substitute crab or lobster)
6 baby yellow squash
10 spears asparagus
Bunch watercress
A handful of butter beans
Beurre Blanc Sauce
2 tablespoon salad onion very finely diced (I used spanish onion, which turned by sauce a little pink - nice against the bug meat - you could call it beurre rose sauce)
½ cup white wine
¼ cup white wine vinegar
Between 125 g butter, cut into ½ inch cubes and chilled in the freezer for ½ hour.
For the Salad –
Blanch the each kind of vegetable separately and refresh in iced water. Drain and pat dry. Toss with a drizzle of olive oil and a teaspoon of white wine vinegar, sprinkle with sea salt. Set aside.
Boil the bugs for about 8 minutes, until red. Refresh in ice water. Apply pressure to the joint between the tail and head, ease away the tail. Pick out the tail meat and shred with your fingers. Set aside in a bowl.
For the beurre blanc sauce –
Rapidly boil the wine, vinegar and salad onions together until reduce down to about 2 tablespoons of liquid. Reduce heat to lowest possible. With a metal whisk, briskly whisk in one or two cubes of chilled butter at a time, adding additional cubes as each is incorporated, until all butter is combined. For a lighter sauce, double the amount of wine and vinegar, reduce to about 1/3 cup, and add about 25g of butter.
To serve – arrange salad vegetables on a plate, drizzle the beurre blanc around the edge of the place and place the bug meat over the top.
Posted by Miss Anne at 3:41 AM
Labels: gluten-free, sauces, seafood, summer