Panzanella, past and present 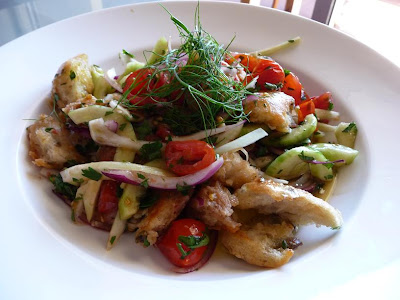 I am not very good at following recipes
I like ideas. I tend to treat recipes as a general guideline. Often I buy cookbooks just to look at the pictures. It’s an approach that has some draw backs when it comes to anything involving gelatine.
I struggle with the concept of ‘authentic’ food. That is, with the argument that unless a recipe is executed in a certain way it isn’t ‘really’ that food at all. I get very confused very quickly when I start down this line of thought.
It’s not that I dispute that certain foods have traditional execution, nor that certain foods have specific historical origins.
It’s more that I am uncomfortable with any tendency to essentialise culture. When we try to fix a food, really pin it down, deny change or innovation or variation, we are starting too, to essentialise the culture the food is connected to. In making the food absolute, we also start to separate the food from its immediate current cultural context (which changes), and fix it at a point in time, somewhere in that culture’s past. We are making all kinds of assumptions about what is real about a culture, about then being more real (and maybe even better) than now.
We may eat the same food our grandparents ate, but we eat it for a different reason, in a different time, sometimes in a different place.
Take this too far, however, and we run the risk of losing what is special and meaningful about food and its place in our cultures. We risk making what we eat empty of any symbolism at all – a thing completely independent of any context, other than flavour.
I think of recipes as being an expression of concept: the way of living in a certain culture, a certain time and place. To me, what is important about a recipe is the motivation, the story behind the ingredients and method, not the ingredients and the method themselves.
Some of my favourite ‘recipes’ originated as a direct response to the immediate local environment. Most are grounded in seasonality, availability and practicality. Abundant, fresh and diverse seafood? Make bouillabaisse. It doesn’t matter to me that I don’t have scorpion fish (the local fish of the port of Marseille, where the recipe originated). It will still be bouillabaisse for me. You prefer hard boiled eggs to poached eggs and don’t like anchovies? I think we can still make Caesar salad.
Yesterday’s bread and a basket full of ripe tomatoes? It can only be Panzanella, regardless of whether I have basil (I don’t), whether I toast and/or soak the bread or whether we’re in Tuscany (although this last one would certainly improve matters).
The recipe represents the past and the timeless. The act of cooking expresses the practical reality of what it is in the fridge right now. Somewhere in between the two we are creating, maintaining and continuing the cultures within which we eat.
In the following and the not following of a recipe we have an opportunity to remember the past and another place, and at the same time tell a story about how we, here and now, actively bring that past with us into the present.
Panzanella, as made for lunch today*
Serves 2
1/3 loaf left over bread. In this case, a green olive white flour loaf.
250 g cherry tomatoes
½ red onion, sliced into very thin wedges
½ bulb fennel, very thinly sliced
1 cucumber, peeled, de-seeded and thinly sliced
1 clove garlic, crushed
Juice ½ lemon
3 tbsp finely chopped parsley
Good slurp oil oil
About 1 tbsp balsamic vinegar
Sea salt

Tear the bread into largish chunks (about 1 ½ inch cubes). In a large fry pan, toast bread with a little olive oil until a bit crunchy on the outside but still soft-ish on the inside. Set aside.
Cut the cherry tomatoes in half, and squeeze the juice and the seeds of each half into a bowl. Throw the squished tomatoes into the (now empty) frypan and turn off the heat (I find the residual heat is enough to bring out the sugars of the tomatoes a bit more).
Add balsamic vinegar, olive oil, lemon juice, parsley, garlic, onions, cucumber and fennel to the tomato juices and season with sea salt, allow to marinate for about 5 minutes. Toss the tomatoes and bread through and serve.
* Recipe may change next time I make it.
Posted by Miss Anne at 2:53 AM
Labels: dairy-free, health, salad, summer, tomatoes, vegetarian