A is for Apple, B is Boring, C is for Crumble 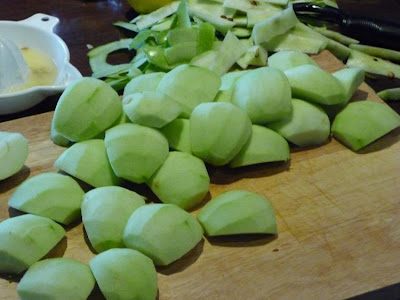 Apples are credited with keeping doctors away, impressing educators and proving the effects of gravity. Although mythological credited with the fall of man – or more precisely, the fall of woman, nothing is more mundane than the apple.
A sensible, serious fruit.
Perhaps contributing to the boringness of apples is the fact that they almost never feature as the stars of haute cuisine. Apples-as-dessert tend to be home-cooking’s domain: apple snow, apple pie (oh, tarte tatin), apple crumble, stewed apples, apple butter, apple tea-cake. Cooked apples are for eating in the kitchen by the fire with a cup of tea. 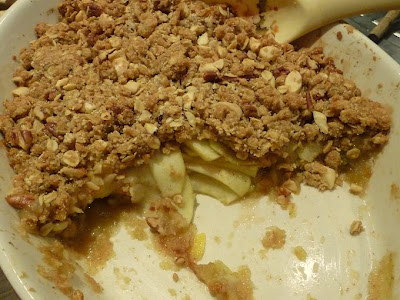 It is difficult to imagine the apple being an object of excitement or desire – presented alongside option such as figs or mangoes or strawberries, the ever-available, the cold-storage apple is likely to be eaten without thought. So someone (we’ll call her Eve) jumping up and down, squealing “COX’S ORANGE PIPPINS” over and over again would probably be a bit weird. And embarrassing for the people around me. I mean Eve.
Despite their year-round availability, apples are seasonal. Most varieties arrive at their peak during the autumn months – and some of the rarer varietals have very short season indeed. Hence the excitement about the Cox’s Orange Pippin – the most common ‘red’ apple in the UK, it is almost impossible to find in Australia (not at all suited to our growing conditions). When fresh, it is crisp and sweet and tangy and quintessentially the perfect eating apple. It does not store well, and is therefore to be jealously and joyously consumed for the few short weeks of its season.
Of course, we live in a world where everything is available all the time, and everything is grown for green-picking, bruise-free transportation, long-storage and slow ripening. Our fruit is harder and sweeter than nature intended. Stored apples tend to lose their crispness and tart edge-of-sourness. Yawn.
‘So’, whispers the snake (in a place where the supermarket is mysteriously also the garden of Eden) – ‘the autumnal apple is the tastiest, the crispest, simultaneously the sweetest and tartest apple you will find. The fruit at the other times of the year will not satisfy the same way this new-season apple will. The supermarket tricks you with the ever-present cold-storage apple. Eat the apple as God intended’. Possibly heresy, but the apple deserves to be made sexier, more mysterious, more desirable.
There is something honest, something wholesome, about home-made apple crumble. It’s rustic. It’s old-fashioned. It’s stupidly simple to make and won’t win awards for beauty. Apple crumble is about home and homeliness.
Don’t make a small amount – there’s no point. Fill a deep, deep pie dish and top with spiced crumble. Fill the whole street with the smell of cooking apples and brown sugar. Entice your neighbours in for a cup of tea and a bite of the apple. 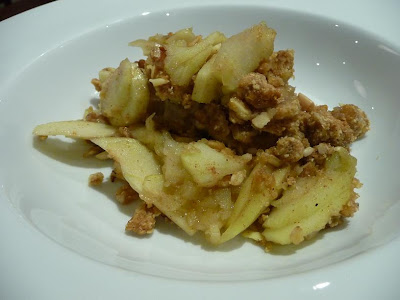 Home-cooking classic, with a hint of exotic spiciness. Serves 6-8.

Grease a large baking dish with a little butter.
For the filling: peel and quarter the apples, then slice thinly (about ½ cm). Toss with the sugar, spices, lemon rind and juice. Tip into baking dish. 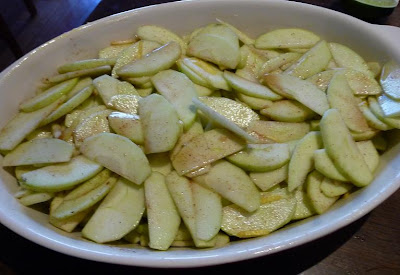 For the crumble: with a bar mix or food processor, blend the butter with the mixed peel.
In a large bowl, mix the butter mixture with the dry ingredients (I use my hands) – be careful not to over-mix, the idea is to have a very crumbly mixture – hence the name apple crumble.
Sprinkle the crumble mixture over the apple filling.
Bake in a moderate oven for about 40 minutes, until the topping is crisp and the apples cooked through (some will retain it’s shape and the outer edges will go mushy, that’s part of its charm).
Serve with a cup of tea. And custard or ice-cream.
Posted by Miss Anne at 3:23 AM
Labels: baking, dessert, sweet-things