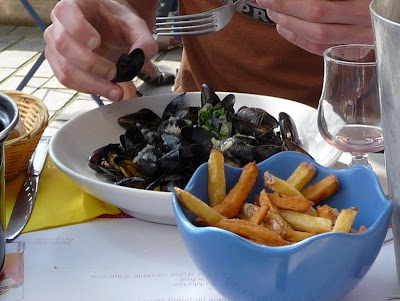 I speak terrible French. More accurately, je ne pas parle Francais. I cannot pronounce even the most important of the words I do know (vin).

As if a long haul flight via Singapore via Heathrow to Dublin is not punishment enough, I arrived in France after an over-night sea voyage from the south-east coast of Ireland. Travelled from Roscoff by bus as the train was not running.

Through vineyards and fields growing artichokes and cauliflowers. Past old men on bicycles, one with a loaf of bread in the basket. I suspected these were plants by the French tourism authority.

To arrive at the top of a soaring nineteenth century viaduct. Then, according to Google maps, my hotel, charming and balconied, was only a short walk away. What became apparent was that this short walk was a devious and twisty path, and mostly a direct decent down about four thousand steps. Having missed breakfast, I was ready for lunch.

My first meal in France was a baguette with a selection of charcuterie and chevre purchased from a market, and a glass of vin rouge, ravenously consumed after the epic journey to the bottom of the valley. A picnic in bed. This was the view. 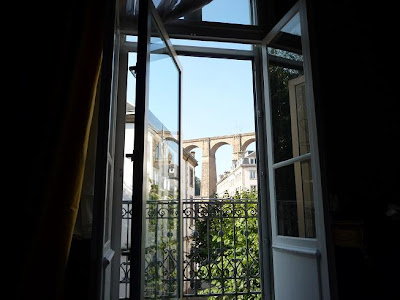 I surrendered to the cliché. 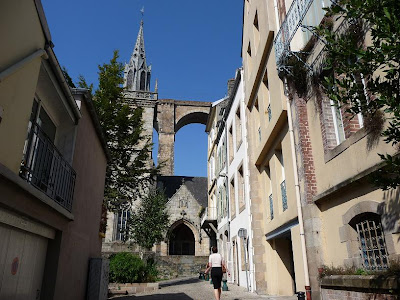 I stayed four days in Morlaix, on the coast of Brittany, pretending I could in fact read the menus. Eating everything but mussels: coquilles Saint Jacques (a delicious pot of scallops in white sauce with mushrooms and cheese), saumons fumes (smoked salmon), fruits de mer (a giant plate of mixed crustaceans and fish), huître (oysters, fresh with nothing but lemon) – all divine, but the French word for mussels eluded me.

And then: moules mariniere. A deep bowl of small mussels, steamed in garlic and onion and white wine and butter, served with pomme frittes. A bottle of rose, crisp, dry.

Nearby, middle-aged Frenchmen with easels resting on cobble stones made pastel drawings of the sail boats bobbing on the river. Overhead rose the spires of the gothic Eglise Sainte-Melaine and the arches of the nineteenth century viaduct. C’est la vie. 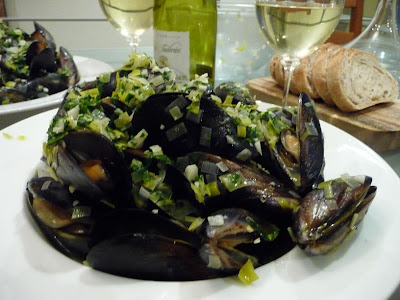 Clean the mussels (scrub them and with a sharp knife, remove any barnacles – most fishmongers will have already done this. Pull the fibrous thread off each one. Don’t use any that are broken). Set aside.

Melt half the butter in a very large pan. Add the leeks, garlic and herbs. Cook until soft. Add the wine and bring to the boil (this will be almost instantaneous) Cook off the alcohol (about a minute).

Add the mussels and cover with a lid (if you don’t have a lid, cover with foil or grease proof paper to trap in the steam). After a minute or two, you will notice the mussels are starting to open. As each mussel opens, remove with a slotted spoon to a warm bowl until all are open. This won’t take long – maybe five minutes. Some mussels just won’t open – discard them, just in case (I like to give then a good chance to open, leaving then in the heat a bit after the majority are open).

The mussels will have release a lot of liquid. Pick out the thyme stalks and bay leaf (some recipe suggest you strain the sauce, but I like the taste and texture of the leeks). Add the rest of the wine and the vinegar and bring to the boil. Cook for about a minute, then rapidly whisk in the remaining butter. Taste, and season if necessary (I don’t add salt to mussel because they are so salty naturally). Stir in the parsley.

To serve, fill a large bowl with opened mussels. Pour over sauce. Serve with pomme frittes (French fries) or crusty sourdough bread to soak up all the sauce. 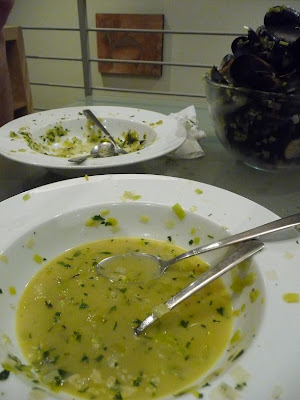 Posted by Miss Anne at 2:02 AM
Labels: cooking-with-wine, gluten-free, seafood