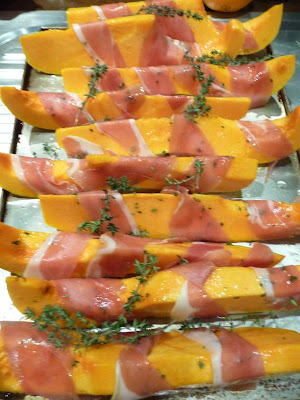 I am not all that fussed about pumpkin. I grew up relatively untouched by pumpkin. My father, a man who religiously grew choko vines for my entire childhood and expected me to eat them, boiled to a watery nothingness, was not all that fussed about pumpkin. If the stories are to be believed (and to be fair, few people remain available or willing to attest to their veracity) he grew up with an adamant refusal to eat pumpkin, boiled to a watery nothingness. And there is some indication that at some early stage he was most villainously deceived with ‘mashed yellow potato’.

We did not eat pumpkin in our house when I was a child. Lack of exposure led to lack of familiarity which in turn led to a benign neglect of pumpkin in my life.*

Halloween, harvest festivals and Cinderella also did not feature in my formative years, and so my lack of pumpkin exposure in the home was not challenged by a broader desensitisation via popular culture. A home-ec incident involving a Queensland blue pumpkin, a blunt knife and the tip of the middle finger on my left hand cemented my general impression that pumpkins and I moved in very different circles.

Had I , as a young child, seen the streets of Hoboken, New Jersey, in mid October, the steps of brown stone terraces artfully lined with bright orange spheres, here and there delicately and expertly carved into hobgoblin faces of glee and terror, I may have been more accommodating and more curious. I may even have been utterly charmed, as I was when well into adulthood I experienced the cultural grip of Halloween for the first time.

But as it was I came to pumpkin in a mechanical and mundane way. It was just another relatively common vegetable that is predicably very nutritious, cheap and colourful during the dreary winter months. It is good for you. Vitamin A and vitamin C. Potassium. Magnesium. Other technical sounding components. It’s a kind of melon, and like melons it has a ridiculously high water content (which makes it fabulous for soup, but certainly explains it’s tendency to become watery). It’s vaguely sweet, roasts nicely, purees well and looks a bit artistic in the middle of table. I made soup and curry and purees and even pies, sweet and savoury. And felt virtuous but never thrilled.

Then the inevitable occurred.

I wrapped it in bacon.

* Which is utterly inconsistent with my near obsession with Brussels sprouts, another subject of childhood deprivation. I don’t get it either. 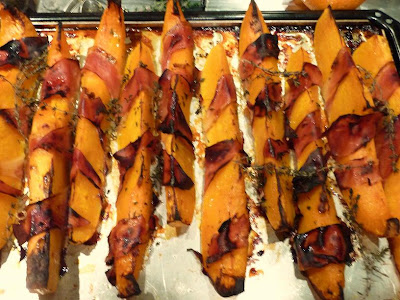 Mix the honey with the butter and boiling water. Brush each pumpkin wedge with the honey mixture. Scatter with chopped thyme, salt and pepper. Wrap each wedge with strips of prosciutto, like a candy cane. Arrange on the baking tray.

Brush over any remaining honey. Arrange thyme sprigs over the pumpkin wedges.

Place in the oven and cook for about 30 minutes or until cooked (a tooth pick or skewer will insert easily when cooked). Cover with foil if the prosciutto starts to become too brown.
Posted by Miss Anne at 5:43 AM
Labels: bacon, gluten-free, winter