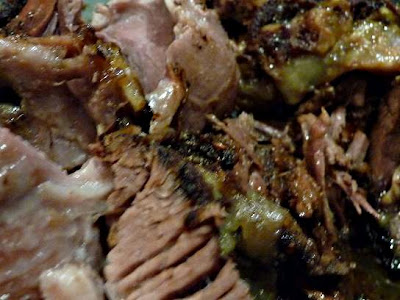 In which there are mistaken identities, long lost twins, virgin births, nativity celebrations, joyous nuptials, duels, mischief, tragic and mysterious deaths, feasting and nothing is explained.

Scene I: A kitchen, mid-winter.

Enter our heroine (me), carrying a quarter of a sheep. Or, as it were, a giant boned-out shoulder-leg-shank of lamb, weighing approximately 3.5 kilos. It is clear that some serious feasting will, at some time, in the not-too-distant-future, transpire. It is not clear, as this stage, whether the piece of meat will fit into the kitchen’s adequate and yet not giant oven.

The meat is set aside, and head after head of garlic are peeled and crushed. Soon a not-insignificantly sized bowl of garlic paste is amassed. Toasted cumin seeds and lemon rind and salt and sumac are added. The strong smelling paste is then applied to the surface and every crevice of the lamb. The lamb is then wrapped up and set aside.

We observe our heroine placing the lamb into a very slow oven. Over the course of several hours she bastes the lamb with the juices spilling into the very crowed baking pan.

Much later, in the evening, she turns off the oven.

Enter our heroine, carrying a large parcel wrapped in bright blue paper and tied with silver ribbon. Accompanying her are a Princess, a Vicar, an Officer and a Clerk of the Court. It is clear they have been at an ale house, and several of the party are carrying bottles of wine.

The heroine returns the lamb to the oven, along with potatoes. Various other items are set to cook including green beans in tomato and onion sauce and dried legumes and chard with garlic. The lack of olives is lamented, and wine is decanted.

As more wine is consumed the smell of cooking lamb wafts through the gathered party. Noses twitch and mouths water.

Finally the heroine presents the with a flourish the meltingly tender slow cooked marinaded lamb. The garlic crust is dark, dark brown and bitter and sweet from the long time in the oven. The meat is pink in the middle and so soft it falls apart at the touch of a spoon. The potatoes are golden and crunchy and nutty with oregano and thyme.

Later, pastries dripping with honey and filled with nuts are gluttonously consumed.

More than one birthday has been celebrated and all go to bed merry and sated. 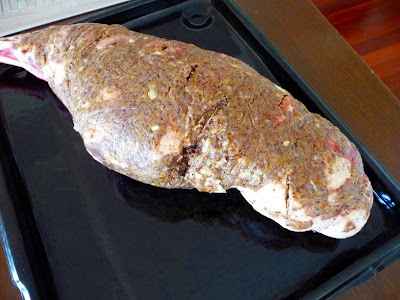