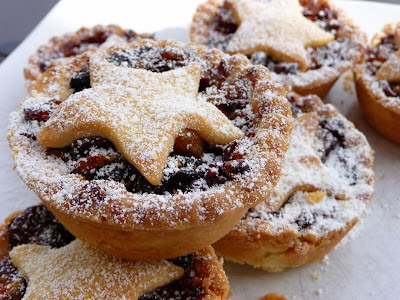 ’Twas the month before Christmas, and all through the flat
Not a surface was clean of flour or fat
Pastry and cutters were strewn all around
In the hope that good eating soon would abound


The shortbread was nestled all snug on their trays,
While the oven was hot, as it had been for days.
And I in an apron, with a slogan ironic
Had just settled down for a nice gin and tonic
When into my head popped an unsettling thought,
I sprang to my feet feeling distraught.
Away to the pantry I flew like a flash,
Tore open the doors and spilled out my stash.

I worried I’d find nothing but squishy sultanas,
As appetising as nasty overripe bananas.
When, by what vision my wondering eyes should be lit,
But dark chocolate shavings, cranberries and hazelnut bits.

Now cardamom! now, nutmeg! now, orange brandy!
on cloves, on brown sugar with a sweetness of candy!
Finally blanched almonds, chopped, toasted and browned!
All tossed from the cupboard and onto the ground.


Then, in a twinkling, I chopped up the fruit
And stirred in mandarin marmalade made by Aunt Jude.
I added the nuts and the apple and mixed it around,
stirred through the chocolate and spices, whole and ground.

I splashed in the brandy, until all was gooey and wet,
And covered with cling wrap to allow it to set.
Then after a week I made more buttered shortbread,
(Although store bought shortcrust would work well instead).
I pressed the pastry to line a small muffin tin,
And filled with the fruit mince up to the brim
And laying atop each a star or stylized tree,
I created some goodies both delicious and twee.
When the last star was fixed, I brushed with egg glaze,
And sprinkled with sugar, then picked up the trays
popped them into the oven, pre-heated and warm,
And sat back to wait for the pies to transform


After twenty five minutes, the timer gave a screaming,
And I pulled out the tarts, golden and gleaming.
After a minute or two, I popped them onto a rack
To cool down and settle before I could snack As popped my feet up to rest and relax
I heard the sound of a thief scoffing still-too-hot snacks
But I heard him exclaim, that prince of my heart,
"Happy Christmas to all, it’s a bloody great mince tart”.
* clearly a homage to Clement Clarke Moore 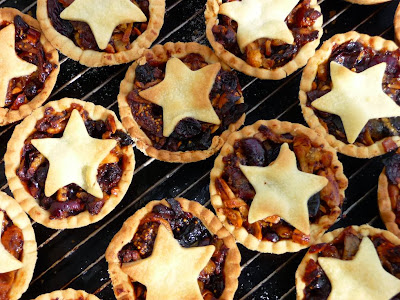 ... are an inexact science. Traditionally fruit mince did in fact contain minced lard (creamy pig fat), which made them ridiculously rich and luxurious. It can be hard to source these days, and really, the caloric load of these babies doesn’t need further encouragement.

Approximately 1 kg of dried fruit, in pretty much any combination

Line shallow muffin tin with rounds of shortbread mixture or shortcrust pastry. My tins are almost magical in their non-stick-ness, so I don’t line or grease them. Use muffin-tin liners if you’re worried about the pastry cases sticking.

Fill with a heaped tablespoon of fruit mince mixture (or until level the top of the crust). Top with a star (or make a lid, sealed to the case with a bit of egg wash – if you do this, make sure you poke a wee hole in the lid to let the steam escape, otherwise you may end up with exploding pies ...). Brush with egg wash and pop into a moderate over for about 20 to 25 minutes (they’ll smells toasty and buttery, and be golden on top when they’re done). Leave in the tins until almost cool (otherwise the pies might break apart when you try to remove them from the tin).